We’re in the news.
Read all about it...
Faizal Salieh appointed to Cargills Bank Board – (DailyFT) 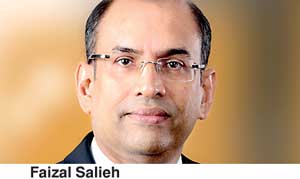 Cargills Bank announced the appointment of veteran and respected banking professional Faizal Salieh as a Non-Executive Independent Director to its Board of Directors.

Faizal is well known for the outstanding leadership role he has played in initiating, developing and furthering the practice of interest-free banking in Sri Lanka based on the principles of profit and loss sharing.

In 2004 he took a tremendously challenging job as Managing Director of an unregulated non-bank financial institution, transformed its entire business and led the formation and establishment of Amana Bank in 2011, as the country’s first commercial bank operating entirely on the principles of Islamic banking. He also played a key role in facilitating appropriate changes to the country’s regulatory, fiscal and legislative framework to support interest-free banking.

He was the founder Managing Director and CEO of Amana Bank and retired in June 2014 after 10 years of outstanding contribution to the first Islamic finance initiative in Sri Lanka. He was the first Chairman of the Technical Committee on Islamic Banking of the Sri Lanka Banks’ Association, a committee which he initiated and led. Earlier on Faizal had led the formation of NDB Housing Bank, the country’s first private sector housing bank and was its CEO and Board Director. Faizal has well over three decades of extensive experience in commercial and development banking both in Sri Lanka and overseas; has held top management positions in global and local banks such as Grindlays Bank, ANZ Bank and National Development Bank; Board Director of several companies in the business of banking, finance, insurance, fund management, stockbroking, manufacturing, trading, and education; has served on State University Boards, and several Government and Non-Governmental Committees in the fields of finance, economic affairs, housing, construction and tertiary education.

In addition, he served on the Boards of Lanka Clear Ltd., which is the country’s automated cheque clearing house, The Institute of Bankers of Sri Lanka and Distance Learning Center Ltd. He also serves on the Board of HNB General Insurance Ltd. as a Non-Executive Independent Director and is a Visiting Lecturer on the MBA program at the Postgraduate Institute of Management of the University of Sri Jayewar-denepura. He is also a Director on the Board and Council of the Sri Lanka Institute of Directors.

Faizal holds a Bachelor’s Degree in Economics with First Class Honours, a Master’s Degree in Business Administration and is a Fellow of the Institute of Certified Professional Managers in Sri Lanka.